Thankfully, I did not have to immediately start job hunting after college. My mother had graciously scheduled me for a painting workshop in Hancock, NH. She had previously taken classes with the painters Numael and Shirley Pulido and believed it would be beneficial for me to take one as well.

Hancock, NH. The perfect New England town. And I mean perfect. Google Maps it and make sure to do street view down Main Street.

Now, before I got to the workshop I was moderately to heavily nervous. I had done plenty of painting at UNH, even went to Italy to paint, but I never attempted Classical Realism. I had naturally gravitated to Impressionism from the get-go and had never really left that realm.

But the Pulidos turned out to be adorable and there was nothing to worry about at all. Numael Pulido is skinny and tall, his shoulders slightly hunched from a life of art. He is originally from Colombia and has a light accent that makes him very pleasant to listen to. Shirley Pulido is a rosy, grandmotherly figure who is always willing to listen. They make a truly unique teaching duo. Especially because they like to do their fair share of healthy arguing. It was comical to watch.

The Pulidos started the workshop off by having us paint a drapery. Our canvases were given to us with the image pre-drawn, because as Numael said, “I am here to teach painting, not drawing. Drawing is something you must work on throughout your life.” Over this drawing, we put a light earthy tone and then, with a cloth, wiped out the lights to give the painting a basic feeling of light and dark. Simply put, we were creating an underpainting without the painting. After that, we began our true work.

First came the lunch break. With the other students, I walked down Main Street to the local cafe, Fiddleheads. And I had an amazing tuna sandwich.

Afterwards I did some exploring.

I saw the sign before I saw the graves. I kind of want it for my bedroom or something.

The graveyards were beautiful. I guess I have a weird fascination with old tombstones.

Look at all those graves! And this was only one of two massive graveyards.

Back at the studio, the Pulidos gave us our second painting to tone and wipe. It was a basic still life, and we spent the rest of the day wiping and wiping.

The second day we started painting. We started on the drapery. And though we did not paint the drapery again until the second to last day, I have included the photos one after another so that the progress can be seen.

Initial go through with paints. Established lights and darks with cools and warms.

The second, and final, painting of the drapery. Made my colors warm to reflect the warmth of the object and shadows.

We, the students, hard at work.

After working through the first session of the drapery, and then having lunch, we started on the still life and worked on that for the rest of the week. 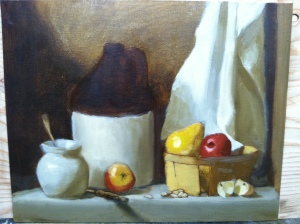 Working out shadows, half-tones, and highlights.

Solidifying darks and starting to pull out some reflected lights.

Continuing to work on color nuances in the fruit.

Defining the light and darks of all the objects and lightly addressing detail.

By the end of the course I had developed a good portion of the painting, but still had a few areas that were not finished. The Pulidos said to not worry about that and just concentrate on starting a painting on my own. Then they threw my painting in a frame they had.

Look at that frame! It’s like something from a salon!

I should mention here that the blue lines on the cloth were done with a stencil. The cup was meant to be stenciled too, but I never got around to it.

The workshop lasted from Monday to Saturday, but we finished painting on Friday. On Saturday, we came in early to gather our stuff and take it home.

The shed that served as our workshop room.

Here are a couple photos of what the inside of the shed looked like while we were painting.

The right side of the shed with its mural. 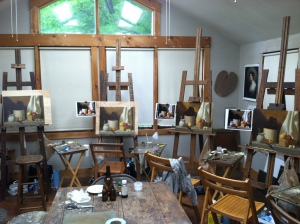 The left side of the shed. My painting is the second from left.

After we put our paintings in our cars, the Pulidos brought us into their house and up into their attic studio. As I climbed the stairs, my head scraped the low ceiling. I had to duck through the doorway at the top. I came easily to the conclusion that their house is old. Afterwards, I looked it up and learned that almost every house on Main Street in Hancock is on the National Register of Historic Places. Which made sense. The town is like a huge trip back. One day I even saw an old Model-T putt by, its driver grinning at me with his mustache. Once up in the studio, the Pulidos gave us a few lessons.

Numael and Shirley showing us how to set up a still life. 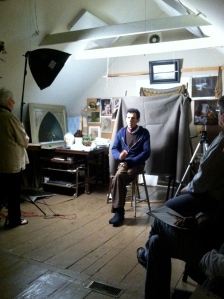 Numael Pulido demonstrating the incorrect way to pose for portraiture.

Numael photographing a student in the correct pose for portraiture

After the lessons, we were set go. Some students said their quick goodbyes while other milled around. I was one of the latter ones. 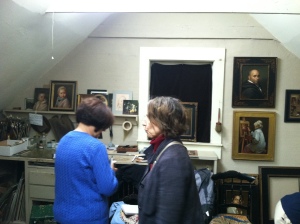 A wall of their studio. I was surprised at how small many of their paintings were. 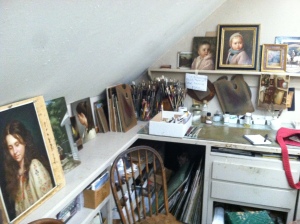 Check out all those brushes in the corner! 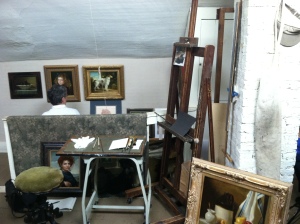 Another corner of their studio.

Items to set up a still life.

Eventually I had to leave. But before going, I was able to have an incredible conversation with Numael Pulido about Russian literature. We discovered that we’re both of the opinion that the Russians seem to see the world through the lens of morality. I hope that’s not too much of a generalization. Shirley kissed me on my cheek as I left, and told me to stop by again. I’m holding her to those words.

My ride home gave me an opportunity to reflect on what I had experienced. I had gone in as a lover of Impressionism, never too interested in Classical Realism. The course had certainly changed my outlook. I realized that I could adopt almost everything that I learned during the class. Numael Pulido primarily teaches the concepts of warm and cool and his workshops are designed to illustrate temperature’s necessity. Those are ideas that are highly necessary in Impressionism and all types of painting. And I will now admit I am turning away from my past and looking into a future with Realism, though maybe not to the full extent of the meaning. I believe that I can find a happy balance between smooth strokes and wild ones. And Numael believes it too. He mentioned many a time how John Singer Sargent makes his darks smooth and mainly exercises his expression in the lights. Maybe I’ll be like that. Who knows? I’m looking forward to messing around and seeing what happens. I’m enthusiastic.

Though I’m now done with the course, I am looking forward to the next time I’m able to take a class with the Pulidos. If anyone out there is interested in them, here’s their little blog: http://pulidostudio.blogspot.com/.

Finally, here are a couple Snapple Facts acquired during my lunch breaks that week.

4 thoughts on “Week with the Pulidos”