I’m running out of canvases. I no longer have any 9″x12″s to paint on, so for this week I had to use what I had. That meant I went big. Last week I incorrectly stated that the Drill and Weight painting (I need to start naming them properly) is 20″x24″. I don’t know how I wound up with that measurement, but its actual size is 16″x20″. This week’s painting is truthfully 20″x 24″. So I’ve definitely jumped in sizes after weeks of small paintings.

Because I’m using objects I find around the house, my first day of painting always begins with a scavenger hunt. It’s interesting to find out what things are lurking in the dusty recesses of the garage or hiding under piles of cardboard boxes in the basement. For this painting I went with an aqua color scheme inspired by a beach towel I decided to use for the background.

In order to quickly block in the colors, I wound up using a lot of medium. This made it appear looser than I liked. But it was an underpainting and just a guide, so I didn’t worry too much about it.

While I usually refine the objects left to right, I started on the right hand side this time. I wanted to get into the red fire extinguisher first, since I considered it the focal point of the painting. 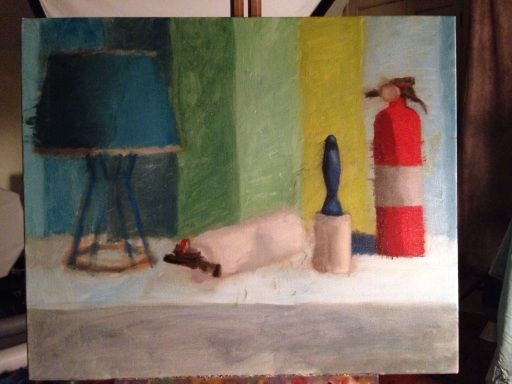 After the extinguisher came the the lint roller. I don’t know if it’s an immediately recognizable item, but I enjoyed the contrast between its white body and the blue handle. It was at this point that I realized the painting was not going to be a single day endeavor. So I packed up my paints and let the canvas dry over night.

The next day I began with the table surface. I wanted to put down some shadows so I could get a sense of depth.

I then began solidifying the white extinguisher and the lamp. Additionally, I worked out the whites in the lint roller. As I painted, I noticed some measurements were off but resigned to work on them the next session.

I’d started the painting on Monday, and by Wednesday I was starting to feel it come together nicely. Initially I added labels to the red extinguisher, but right as I was putting them on I realized they didn’t work. I let them be and went on to correcting the issues I’d noticed in the last session. The main issue being the length of the nozzle on the white extinguisher. 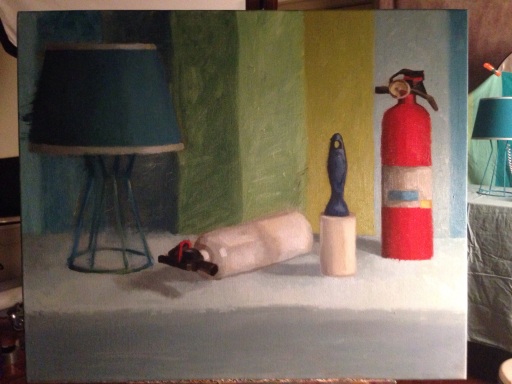 With a lot of work done on the right side of the canvas, I turned my attention to the lamp. Despite it’s simple shape, I struggled the most with it. I just could not mix the colors I wanted. I eventually settled into making it a little greener than it is in life. I also went back into the table and pushed around the shadows some more.

Thursday was my final day of painting and I started out back at the lamp. I shored up the wire base and gave the lamp more of a shadow.

As I finished up, I lengthened the lint roller, adjusted the label on the red extinguisher, and dropped in the front of the table. My final result is something I’m incredibly happy with. What I’m not happy with is the final photo of the piece. It made everything appear too soft and washed out a lot of the subtle blues in the painting. Oh well. I’m still figuring out how to best photograph everything. I really just need a videocamera that can record the whole process.

Finally, I’d like to announce that I was accepted into the New Hampshire Art Association’s New On The Scene Exhibition at the Robert Lincoln Levy Gallery in Portsmouth, NH. It runs from March 4-28 and the Opening Reception is March 7, 5-8 PM. I have two paintings in the show, the still life of the boots (now named “Off Work”) and the still life of the camera and airplane (now named “Traveler”). So come on out to Portsmouth and see the show! I will be there at the Opening Reception.

One thought on “Extinguishers”