Every time I finish a painting I post it on reddit for a little bit of feedback. Last week I was told my painting is “like watching a 1950 family after they get home from work….kinda dull.” I didn’t entirely agree with that assessment, but it made me think of ways to change around my compositions.

On my way to playing basketball after work on Monday I  brainstormed some ideas. When I woke up on Tuesday I knew what to do. I grabbed a lamp, removed its shade, and hung it above my still life via strings. Then I added sheets and two flashlights. My idea was to make the flashlights appear like submarines at sea. I wanted to recreate a naval conflict with inanimate objects.

After drawing out the setup and doing a rough under painting I developed the general color ideas. The canvas was another leftover one I pulled from my basement.  I had 20″x24″ worth of canvas to work with, so I used up a lot of medium just getting down coats of paint.

The lamp was at a tricky angle, but it was the angle I wanted. So I spent a considerable amount of time getting it right.

It has been a while since my workshop with the Pulidos, so when I went to use their drapery painting technique I had to consult my notes and analyze my workshop paintings. I haven’t painted many draperies since then, so I was out of practice. It took several go throughs to get the sheets the way I wanted them.

This is is the step where you can see I really struggled with the positioning of the lamp. It expanded and contracted into the background as I worked away at it. 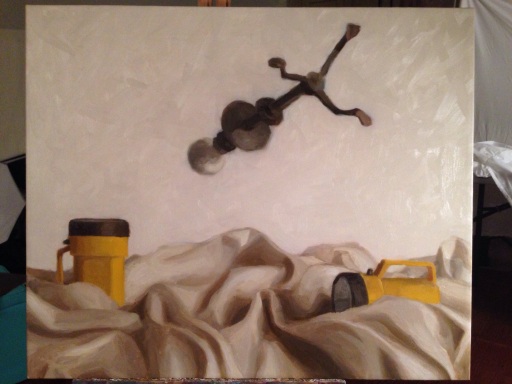 During my second go through of the painting I realized that the background needed to be worked out. Only then would the relationships in the rest  of the painting make sense. So I settled on a muted blue-white.

Having painted several large paintings in the last week I’d have to say I’m starting to prefer larger canvases. I have an order of 9″x12″ canvases coming in, so I’ll paint on those and see if my preferences go small again.

Finally, I’d like to announce that I received an Honorable Mention for Best in Show this weekend at the NHAA’s New On The Scene show. I’ll put some pictures up from the show in next week’s blog post.

One thought on “War Games”