Several weeks ago I went to Ipswich, Massachusetts with my girlfriend and visited The Crane Estate. I was overwhelmed by its beauty and spent most of the time with my mouth open. The building! The grounds! The view! It is all picturesque. They even have a John Singer Sargent sketch. So when we were leaving and I spotted a fellow artist painting away, it was then that I knew I had to get my easel and go back for some plein air action.

This morning I made the trek back down from New Hampshire to Ipswich, this time with my parents. They had never been down before and wanted to go on a tour of the estate. It was a quick ride and I was able to set up my easel around 10:30.

I was originally going to paint the guest house, but I made a split-second decision and decided to paint the old rose gardens. Because the exit road wound past the gardens, I had to squeeze myself onto a narrow patch of grass. Looking left from the easel and down the hill, I got a pretty decent aerial perspective of the garden. So I gave the painting a shot. 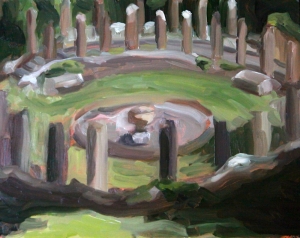 The gardens had fallen into disrepair and resembled an ancient Roman structure of some sort. The columns once supported trellis but are now broken and crumbling. The slow decay of man-made structures was a great contrast with the gorgeous greenery.

Overall, the painting took a little under three hours. It felt good to transition back to a more Impressionistic style. The day was a success in my book.