Several weeks ago I started at Exeter High School as an English intern and since then I’ve been swept up in the start of the school year. At the beginning I was spending most of my days mentally planning out what to say to the students. Since I teach the last class of the day there is plenty of time to build up some anxiety. But I’m relaxing now and don’t get too nervous until ten minutes before the class begins.

Though I’m teaching English, I’m still spending my afternoons painting. I set up a still life in the spare bedroom right before the school year began and I’ve been whittling away at it.

In the past I used canvases straight from the factory. I’d tone them and then paint. The woven threads, or tooth, of the canvas often showed through my paintings. I didn’t like it. The tooth was too perfect, too symmetrical, and pulled attention away from the actual painting. To remedy this problem I gessoed my canvas several times, sanding between coats with 80 grit sandpaper. I didn’t create a perfectly smooth canvas, and nor did I want to. I left the brush strokes barely visible in the gesso so they would later show through a bit. This would make it appear as though I was applying my oils over other layers of paint. The imperfections would help create a more painterly finished product. After gessoing the canvas I toned it in a mid-tone of blue-gray.

The idea for this still life stemmed from my acquisition of a black, metal teapot from my parents. They’re cleaning out their house and found it hidden in a cabinet. The hammer and vase were added as I developed a theme, which wound up being: black. It’s hard to paint the variations in the darks and I wanted that challenge.

Since the canvas had been toned blue, I decided that I would use something orangey-red as contrast, allowing the blue to peek through in places and give the viewer’s eye some nice visual stimulation. I found my girlfriend’s old tapestry in a bag and used that for contrast. I stacked up a few boxes and draped the red cloth over them

Much of my inspiration for this piece stems from the work of David Cheifetz. Particularly The Experiment. I also borrowed his technique of putting a two-way fold in the cloth to give the painting more depth. You can see an example of this technique in Prosperity. I used it in my painting to give the teapot more height so it would balance out with the vase.

The most fun I had was putting in the rough patterns on both the vase and cloth. I did not try to get too exact or particular. It was a bit like sketching. I was trying to just figure out where everything needed to go. 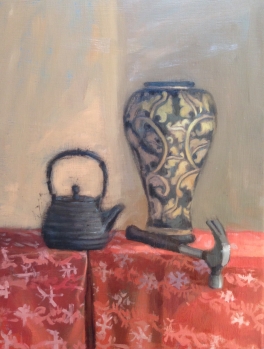 After one full paint through for each object the painting started to come together. I fell in love with the vase and spent many early sessions devoting attention to its gold patterns. 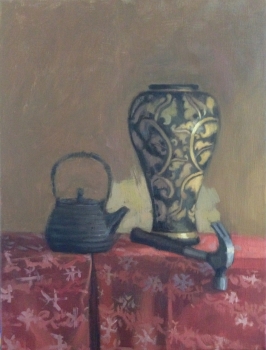 Once I had everything mostly laid out I began tackling the background. Here I went with a flat brown and then realized it was too dark. Something need to be remedied. It needed more light.

The setup was lit left to right so I decided I should echo that flow of light in the background. I spent an entire four hour session working it out. I pre-mixed dozens of colors in order to give the background a speckled, multi-colored effect. 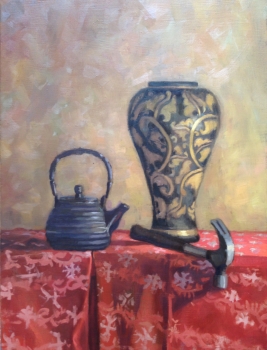 Next I had to lighten up the cloth. I explored different mixtures, seeing how cadmium red would develop when mixed with burnt sienna, cadmium yellow, and cadmium orange. I brightened the top right tremendously and slightly brightened the bottom right.

After adding the lights and highlights, I had to work on the darks. The left sides of the teapot and vase needed darkening to make them appear more round. My last session was mostly spent tinkering here and there to see what more I could do.

The final photo left the cloth appearing a little more orange than it is in life, but it’s a good representation besides that. I’m excited to start the next setup. I already have a plan.

If you’re interested in Patterns, it is on sale for $650. To purchase, send me a request at thewritingmann@gmail.com!

The school year is drawing to a close and I’ve been inundated with coursework. It’s been stressful. It’s been tedious. But I’ve learned quite a bit. Every week I’m at a local high school teaching the kids about various English things. They’ve been reading The Great Gatsby and The Catcher in the Rye and it’s been interesting to return to those texts so many years later. They’re much more enjoyable now than they were when they were assigned. And I suppose I’ve been forced to do closer readings since I have to teach them as well. I’ve had an enjoyable first year of grad school.

But I haven’t been able to draw as much as I like.

This small sketch of one of my teapots was done in a rushed hour before dinner. I experimented with different pen sizes and worked my way from an angular sketch into one with smoother transitions between lines. Not exactly happy with the angle of the teapot, as it feels like it’s leaning to the right, but that’s all right.

Finally, I discovered Jeremy Mann the other week and really liked his work. Check him out!

I suppose I have a thing for teapots and kettles. I’ve done several paintings of them and whenever I’m at a junk store I look at their collection and imagine the still life paintings I could make. There’s something about the roundness and surface shine that just clicks with me. I especially like the solid color pots. A couple weeks ago I did a quick pen and ink sketch of one of my teapots.

You may recognize this pot as the blue one I used in my watercolor from a month or so ago. I’m thinking of doing an oil painting of it as well.

A few days ago I was walking through the art building on campus and came across a small showing of Craig Hood‘s work. He was my advisor and several time professor during my undergrad. Recently he did a few practice sketches in preparation for some paintings. These sketches were what were on show. 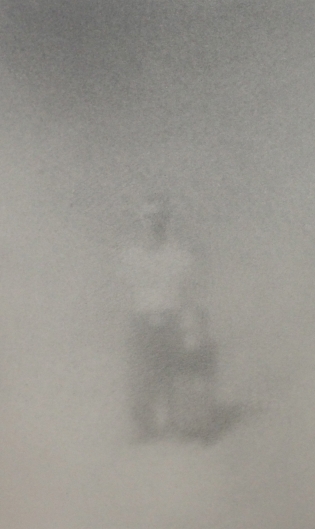 I’ve never been one for drawing softly, but how I do love the softness of these drawings. If you check out Craig Hood’s website you’ll see that even his paintings are done in this style. I think I’ll attempt a few drawings like his. I’ve found that when I experiment with different techniques I learn the most.

I’m sorry for being late with this post. I’ve started a new job and my time is being eaten up. Gonna try to be better for next week.

Last Friday I drove home from my girlfriend’s apartment, unpacked my school bag, and realized I’d left my laptop charger at her place. I was forced to write out my papers on loose leaf. And since I couldn’t sit around on the Internet that afternoon, I got some sketches done.

First I set my easel up in the bathroom for a self-portrait. There wasn’t a lot of space in there and I wound up balancing 85% of the easel on the sink under the mirror. The other 15% was supported by one of the easel’s legs. But it couldn’t reach the ground, so I had to stuff my paint rag box underneath of it. Once I got everything  jerry-rigged I set my 12″ x 18″ drawing pad on the easel and went to work with a stick of charcoal.

I called it quits after an hour. I didn’t want to spend too much time working on it. Overall, I’m pleased. My only complaint lies with the lips. They’re obviously off, making it look as though my upper jaw protrudes a good deal farther than my lower jaw. It was a fun drawing and I wanna do more weekly charcoal sketches.

After I got done drawing, I busted out the watercolors and did a small still life.

I worked on this for about 2 hours, trying to be as fast as possible. I went directly into the paper and didn’t use a sketch. You can see this approach led to some wonky shapes/perspective. Watercolors aren’t exactly as forgiving as oils. I thought of going back in once I was finished and redrawing everything with a pen. But I decided to just let it stay a sketch and not worry about it anymore.

Next update I’ll have a few drawings from the children’s book I’m working on for my grammar project.

I learned something. While exporting my latest painting photos last night I received an error message and my photos were corrupted. In my attempt to repair them, I lost them. It was horrible. But I learned to backup photos as soon as possible. It was a good lesson. Unfortunately that left me with no photos to share today. So this morning I had to take a new shot of the final piece.

It was done on an 8″x10″ canvas over two days, from life, and with natural light. Usually I use an incandescent spotlight to get my exact lighting. This time I had to get crafty. I built a box around the still life using cardboard and adjusted the angle of the box in order to distribute the light and shadows where I wanted.

The concept for the painting came about when I was making tea with the red teapot. I received it as a Christmas gift from my girlfriend’s brother and was immediately struck by its wonderful color. I knew I had to put it in a still life. But the full idea didn’t come into being until I was making a nice sapphire tea with it. I sipped at my tea and thought of the phrase “tea for two” and realized I needed to make a painting that played off those words. However, I wanted there to be an uneasiness in the painting. So I excluded teacups and included two shortbread cookies instead. I wanted the viewer to wonder why the cookies were out but no cups. Why would someone set out tea like that? And to complete the composition and create a color theme, I added a red box of tea.

When I finished the painting, I discovered that I wanted to name it. I haven’t done that to any of my paintings so far. But I felt like it needed a name. So borrowing from the phrase “tea for two,” I have named this painting “For Two.”

With this posted, I am once again off to Boston. This time to visit the Museum of Fine Arts and see the exhibit of John Singer Sargent watercolors.